Würzburg, March 21, 2022 – What tasks need to be done today, and which is the most urgent? People have to constantly set priorities in their daily life. Bacteria are no different: they too must prioritize when combating viruses with CRISPR. However, it was unclear how this prioritization takes place. Scientists from the Helmholtz Institute for RNA-based Infection Research (HIRI) in Würzburg, a joint venture of the Helmholtz Centre for Infection Research (HZI) in Braunschweig and the Julius Maximilian University (JMU) Würzburg, in cooperation with researchers from the universities of Würzburg, Freiburg and Leipzig, have now described an underlying mechanism for the first time. Their study was published in the journal Nature Microbiology.

Most bacteria use CRISPR-Cas systems to protect themselves against infecting viruses. The defense systems target snippets of viral DNA and store them between fixed, repeating sequences. These segments, consisting of alternating repeats and snippets of viral DNA, then produce CRISPR ribonucleic acids (RNA). The CRISPR RNAs help the system to recognize and combat viruses. Picking up a viral DNA snippet provides immediate protection. By storing the snippets within the bacterial DNA, protection can be passed on to new generations.

Preventing system overload – but how?

However, the storing process is not without risk: with tens or even hundreds of snippets, probing for that many viruses at one time would overwhelm the CRISPR-Cas systems. As a result, the systems have devised a way to prioritize the newest snippets for defense. This way, they provide stronger protection against the viruses most recently encountered by the cell. While this phenomenon has been known, the underlying mechanism has remained a mystery. 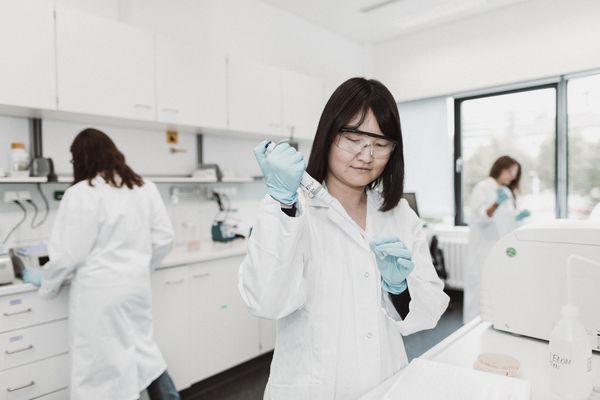 Using the CRISPR-Cas9 system from the pathogen Streptococcus pyogenes as a model, the research team has now discovered that the leader RNA prioritizes immune defense. This sequence is located adjacent to the segment of repeats and viral DNA and is responsible for picking up the viral snippets. During transcription, it folds with the first two repeats surrounding the newest snippet, driving production of the first CRISPR RNA over other CRISPR RNAs. Thus, the system prepares to search for this virus. “The mechanism is specific to many CRISPR systems involving the Cas9 protein commonly used for genome editing, although other mechanisms likely exist for prioritizing anti-viral defense,” says Chunyu Liao, lead author of the study published in the journal Nature Microbiology and former HIRI postdoc.

“This outcome was fully unexpected. The leader RNA was only thought to direct where new viral snippets were integrated,” explains corresponding author of the study, Chase Beisel. Beisel is a professor at JMU and head of the Synthetic RNA Biology Department at HIRI.

“The structure formed between this sequence and the first two repeats is a new element in CRISPR biology. It reveals another mechanism by which RNA can contribute to immune defense. Our research assigns a whole new role to the leader sequence, which has not previously been associated with CRISPR RNA production,” adds Liao. According to Beisel, the findings are significant: “The 2020 Nobel Prize in Chemistry was awarded, among other things, for the discovery of how CRISPR systems involving Cas9 produce CRISPR RNAs. Our study offers new insights into this process: it shows why the location of these snippets is as important as their sequence.”

Beyond providing insights into the arms race between bacteria and viruses, this newly discovered mechanism could be used to develop multiplexed CRISPR technologies for the treatment of diseases, which are caused by a variety of mutations in the genome.

Therapeutically modified white blood cells hold great potential in the treatment of multiple myeloma, a malignant cancer of the bone marrow. However, they can lead to serious...

HIRI’s Jörg Vogel and Alexander Westermann provide a comprehensive review on the past, present and future of RNA-sequencing in the context of infections. The review was...

Britta Grigull, Head of Marketing and Spokesperson for the designated Würzburg State Theater, will take over the PR work of the Helmholtz Institute for RNA-based Infection...

Scientists from Würzburg and the US have charted the first global atlas of direct interactions between SARS-CoV-2 RNA and human host cells. This may provide a starting point...

Only one small protein needs to be missing and salmonellae are no longer infectious. This was discovered in a study in which the pathogens were re-analysed using...

Vogel's appointment is the result of his contributions to the discipline of microbiology, notably as a pioneer in the field of non-coding RNA in bacteria in the context of...

HIRI scientist Mathias Munschauer, together with colleagues of the JMU Würzburg and the Broad Institute (Cambridge, USA), develops the first global atlas of direct...

In meningococci, the RNA-binding protein ProQ plays a major role. HIRI and JMU researchers show in Nature Communications that together with RNA molecules, it regulates...

This 2-day meeting, jointly organized by the science academies from France, Germany, Sweden and the United Kingdom, is postponed to 2021 due to the COVID-19 pandemic. The new...

HIRI affiliate Prof. Utz Fischer from the Biocenter of the Julius-Maximilians-Universität Würzburg (JMU) and colleagues from the the Max Planck Institute (MPI) for Biophysical...

Cells are equipped with multiple defense mechanisms to fight off intruders. Genes encode the building blocks of the response that must be activated during an enemy attack in...

The Feldberg Prize for German-British Exchange in the Life Sciences 2019 goes to Prof. Jörg Vogel from Würzburg. As the foundation recently announced, Vogel on the German side...