How communication between lysosomes and mitochondria controls Salmonella growth in macrophages

Freiburg/Würzburg, July 21, 2022 – Macrophages play a central role in our immune response. They can trap and digest invading pathogens. However, specific bacteria such as Salmonella or Mycobacteria can survive the digestive system of macrophages and escape the control of immune cells. Research from the Max Planck Institute of Immunobiology and Epigenetics (MPI-IE) in Freiburg and the Helmholtz Institute for RNA-based Infection Research (HIRI) in Würzburg reveals how different organelle systems communicate to activate a more effective anti-bacterial defense mechanism. Successful elimination of specific bacteria in the phago-lysosomal system depends on a signal controlling mitochondria. The yet unknown phago-lysosome-mitochondria crosstalk in macrophages leads to a better understanding of how immune cells work and may identify new intervention points for treating infectious diseases.

Macrophages are key cells of our innate immune response. By populating almost all tissues in our body, these cells have an essential role in maintaining our organs in a healthy state, as they constantly remove dying cells or eliminate microbes that have invaded tissues. As cells specialized in eating and devouring, macrophages are exceptionally well adapted to take up, digest and destroy foreign material.

However, certain microorganisms and bacteria such as Salmonella have developed strategies to protect themselves from the macrophages’ digesting attempts, causing severe Typhoid infections and inflammations. Scientists from the Max Planck Institute of Immunobiology and Epigenetics (MPI-IE) in Freiburg and the Helmholtz Institute for RNA-based Infection Research (HIRI) in Würzburg now report in their latest study published in the scientific journal Nature Metabolism how the inter-organellar crosstalk between phago-lysosomes and mitochondria restricts the growth of such bacteria inside macrophages.

Signals from the digestion organelle

The interior of a macrophage, like most other cells, is subdivided into several distinct compartments. These so-called “organelles” each take over specific functions inside the cell, in analogy to the organ systems of humans, which fulfilling specific roles in our body. As professional scavenger cells, macrophages have a very prominent digestion organelle, the phago-lysosome, where engulfed microorganisms are commonly degraded into pieces and become inactivated. “It has long been known that the molecule TFEB (Transcription factor EB) is important for the regulation of the phago-lysosomal system. More recent evidence also suggested that TFEB supports the defense against bacteria,” says Max Planck group leader Angelika Rambold.

She and her team wanted to understand how exactly TFEB mediates its anti-bacterial role in macrophages. They confirmed earlier findings showing that a broad range of microbes, bacterial and inflammatory stimuli activate TFEB and thus the phago-lysosomal system. “It made sense that pathogen signals trigger TFEB as macrophages need a more active digestion system quickly after they devour a meal of bacteria. But, interestingly, the experiments also revealed an additional strong effect of TFEB activation on another intracellular organelle system—mitochondria. This was completely unexpected and novel to us,” says Angelika Rambold. 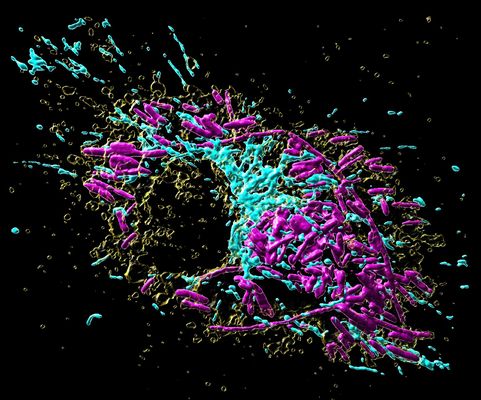 Mitochondria are best known as “powerhouses of the cell”. Composed of an inner and outer mitochondrial membrane, these organelles are the primary sites of cellular respiration and release energy from nutrients. Moreover, the mitochondria in immune cells were recently identified as sources of anti-microbial metabolites.

By using a broad experimental tool set, including metabolomics, molecular biology, and imaging techniques, the Max Planck researchers identified the pathway controlling an unexpected crosstalk between lysosomes and mitochondria. “Macrophages make use of extensive inter-organellar communication: the lysosome activates TFEB, which shuttles into the nucleus where it controls the transcription of a protein called IRG1. This protein is imported into mitochondria, where it acts as a major enzyme to produce the anti-microbial metabolite itaconate,” explains Angelika Rambold.

The researchers explored whether they could exploit this newly identified pathway to control bacterial growth. “We speculated that activating this pathway could be used to target certain bacterial species, such as Salmonella,” says Angelika Rambold. “Salmonella can escape the degradation by the phago-lysosomal system. They manage to grow inside macrophages, which can lead to the spreading of these bacteria to several organs in an infected body,” explains Alexander Westermann, HIRI group leader and junior professor at the University of Würzburg.

When the researchers activated TFEB in infected macrophages in mice, the TFEB-Irg1-itaconate pathway inhibited the growth of Salmonella inside the cells. These data show that the lysosome-to-mitochondria interplay represents an antibacterial defense mechanism to protect the macrophage from being exploited as a bacterial growth niche.

In light of the increasing emergence of multi-drug resistant bacteria, with more than 10 million expected deaths per year by 2050 according to the various expert groups, it becomes important to identify new strategies to control bacterial infections that escape immune mechanisms. Utilizing the TFEB-Irg1-itaconate pathway or itaconate itself to treat infections caused by itaconate-sensitive bacteria might be a promising path. According to the scientists from Freiburg and Würzburg, more work, however, is needed to assess whether these new intervention points can be successfully applied to humans.

The HIRI research group leader talks about her career, her adopted home of Würzburg and her research.

Mathias Munschauer investigates the interaction between host cells and viruses

Jörg Vogel is the director of the HIRI. In his leisure time, the biochemist enjoys traveling, reading contemporary literature and spending time with his family. An interview

How communication between lysosomes and mitochondria controls Salmonella growth in macrophages

Ribonucleic acid is a jack-of-all-trades. It's time to finally give it the floor...

Anuja Kibe was recently profiled in the RNA Society’s Member Spotlight Series, which seeks to recognize the accomplishments of its members.

Similar to the vaccines against the coronavirus, RNA-based antibiotics could significantly improve modern medicine. Research teams from Würzburg have investigated the…

Member of the Caliskan group has just been awarded

Therapeutically modified white blood cells hold great potential in the treatment of multiple myeloma, a malignant cancer of the bone marrow. However, they can lead to serious…

HIRI’s Jörg Vogel and Alexander Westermann provide a comprehensive review on the past, present and future of RNA-sequencing in the context of infections. The review was…

Britta Grigull, Head of Marketing and Spokesperson for the designated Würzburg State Theater, will take over the PR work of the Helmholtz Institute for RNA-based Infection…

Scientists from Würzburg and the US have charted the first global atlas of direct interactions between SARS-CoV-2 RNA and human host cells. This may provide a starting point…

Only one small protein needs to be missing and salmonellae are no longer infectious. This was discovered in a study in which the pathogens were re-analysed using…

Vogel's appointment is the result of his contributions to the discipline of microbiology, notably as a pioneer in the field of non-coding RNA in bacteria in the context of…

HIRI scientist Mathias Munschauer, together with colleagues of the JMU Würzburg and the Broad Institute (Cambridge, USA), develops the first global atlas of direct…

In meningococci, the RNA-binding protein ProQ plays a major role. HIRI and JMU researchers show in Nature Communications that together with RNA molecules, it regulates…

This 2-day meeting, jointly organized by the science academies from France, Germany, Sweden and the United Kingdom, is postponed to 2021 due to the COVID-19 pandemic. The new…

HIRI affiliate Prof. Utz Fischer from the Biocenter of the Julius-Maximilians-Universität Würzburg (JMU) and colleagues from the the Max Planck Institute (MPI) for Biophysical…

Cells are equipped with multiple defense mechanisms to fight off intruders. Genes encode the building blocks of the response that must be activated during an enemy attack in…

The Feldberg Prize for German-British Exchange in the Life Sciences 2019 goes to Prof. Jörg Vogel from Würzburg. As the foundation recently announced, Vogel on the German side…