Würzburg/Braunschweig, June 13, 2022 – Friend or foe? Immune systems constantly face this question. They must recognize and clear foreign invaders without eliciting autoimmunity. Prokaryotic CRISPR-Cas systems recognize invaders based on genetic sequence. But what happens if the host genome shares the same sequences? A research team of the Helmholtz Institute in Würzburg in cooperation with the North Carolina State University (USA) has now discovered a control mechanism exhibited by CRISPR-Cas systems that use Cas13 nucleases: these systems only trigger an extensive immune response if the concentration of the target RNA exceeds a certain threshold. This discovery opens new opportunities for the use of CRISPR-Cas13 in the treatment of hereditary and infectious diseases. The scientists published their findings in the journal “Cell Host & Microbe”.

Distinguishing self from non-self poses a major challenge for immune systems. Failure to recognize an attacker exposes the host to a potentially fatal infection, while erroneous recognition of the host itself can trigger an autoimmune response. “In order to treat infectious and autoimmune diseases, it is critical to understand how immune systems make these decisions,“ says Chase Beisel. Beisel heads the RNA Synthetic Biology Department at the Helmholtz Institute for RNA-based Infection Research (HIRI) in Würzburg, a site of the Helmholtz Centre for Infection Research (HZI) in Braunschweig in cooperation with the Julius-Maximilians-Universität (JMU) Würzburg, and is the corresponding author of the study. 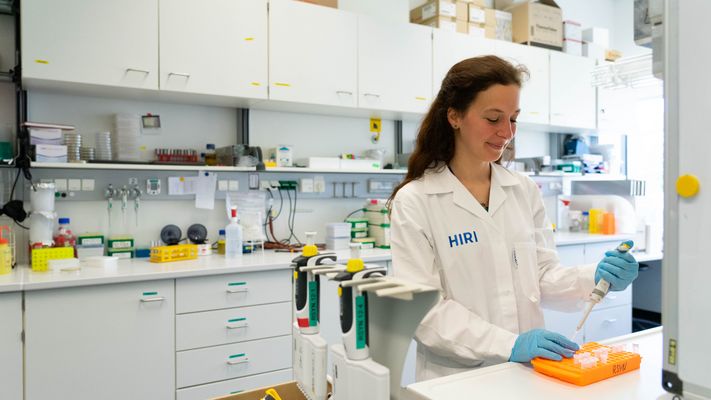 CRISPR-Cas defense systems, which are present in bacteria and protect them from viral attacks, regularly have to decide whether or not to trigger an immune response. In systems that rely on Cas13 nucleases, the immune response manifests through widespread ribonucleic acid (RNA) degradation, which causes the cell to go dormant. The invading virus cannot replicate in this environment, restricting viral spread to other bacteria. “Up to now, it was assumed that CRISPR-Cas13 systems are triggered when two criteria are met: a match between a target RNA and the system's guide RNA and the presence of an additional flanking sequence,” Elena Vialetto, PhD student at the HIRI and first author of the study, explains. “The fact that the concentration of the target RNA also plays an important role was completely unexpected,” she elaborates. This additional “decision aid” allows the cells to differentiate between an acute and potentially lethal infection and a benign infection that can be ignored. “Cells can therefore decide if an infection poses a threat,” Vialetto summarizes. According to Beisel, this is important because some infections can actually be beneficial to a bacterium. Certain invaders, for example, contain antibiotic resistance genes and only integrate into the bacterial genome without killing the cell.

The nuclease Cas13 has the potential to be used in the future to fight viral diseases or to silence adverse genes. “It has always been a curiosity that Cas13 induces dormancy in bacteria through widespread RNA cleavage, yet only cleaves the target RNA in human cells. Our work indicates that RNA levels could help explain this difference,” Vialetto notes. “This provides an extra factor to consider when applying Cas13 to gene silencing,” Beisel adds. The findings of the research team provide a better understanding of the nuclease, laying the groundwork for new innovative therapeutics.

As a next step, the researchers plan to investigate how this threshold extends to other CRISPR-Cas systems that recognize RNA. According to Beisel, this opens up future research opportunities: “There is a whole class of systems, called type III systems, that recognize RNA but rely on other proteins for collateral RNA or DNA cleavage. Here, RNA levels could also have a big impact on the induction of an immune response and on how these systems differentiate between benign and dangerous invaders.”

The study was supported by the Joint Programming Initiative on Antimicrobial Resistance (JPIAMR), the National Institutes of Health (NIH), a bayresq.net Bavarian research network grant, and the Safe Genes Program of the Defense Advanced Research Projects Agency (DARPA).

Member of the Caliskan group has just been awarded

Therapeutically modified white blood cells hold great potential in the treatment of multiple myeloma, a malignant cancer of the bone marrow. However, they can lead to serious…

HIRI’s Jörg Vogel and Alexander Westermann provide a comprehensive review on the past, present and future of RNA-sequencing in the context of infections. The review was…

Britta Grigull, Head of Marketing and Spokesperson for the designated Würzburg State Theater, will take over the PR work of the Helmholtz Institute for RNA-based Infection…

Scientists from Würzburg and the US have charted the first global atlas of direct interactions between SARS-CoV-2 RNA and human host cells. This may provide a starting point…

Only one small protein needs to be missing and salmonellae are no longer infectious. This was discovered in a study in which the pathogens were re-analysed using…

Vogel's appointment is the result of his contributions to the discipline of microbiology, notably as a pioneer in the field of non-coding RNA in bacteria in the context of…

HIRI scientist Mathias Munschauer, together with colleagues of the JMU Würzburg and the Broad Institute (Cambridge, USA), develops the first global atlas of direct…

In meningococci, the RNA-binding protein ProQ plays a major role. HIRI and JMU researchers show in Nature Communications that together with RNA molecules, it regulates…

This 2-day meeting, jointly organized by the science academies from France, Germany, Sweden and the United Kingdom, is postponed to 2021 due to the COVID-19 pandemic. The new…

HIRI affiliate Prof. Utz Fischer from the Biocenter of the Julius-Maximilians-Universität Würzburg (JMU) and colleagues from the the Max Planck Institute (MPI) for Biophysical…

Cells are equipped with multiple defense mechanisms to fight off intruders. Genes encode the building blocks of the response that must be activated during an enemy attack in…

The Feldberg Prize for German-British Exchange in the Life Sciences 2019 goes to Prof. Jörg Vogel from Würzburg. As the foundation recently announced, Vogel on the German side…